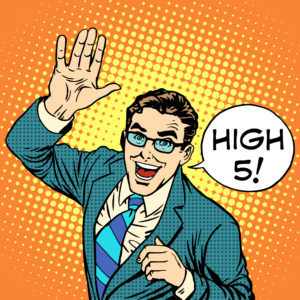 A couple of weeks ago, I witnessed the cutest things and I can’t get it out of my mind. During my 10-year-old son’s basketball game, one of the smaller, less athletic kids on his team got the ball and reluctantly took the shot – making a basket.  The pride and excitement was obvious on his face.  A few minutes later during a time out, the coach sent in a new player to replace him in the game.

As he was running back to the bench, the referee was standing and waiting to let play resume and was in a stance where one arm was up in the air with the other pointed to the spot where the ball would be in-bounded.  As the boy ran out he thought the referee was offering him a high-five so he jumped to slap it to the surprise of the referee which started smiling too.

I’m not sure who else in the stands saw this, but it’s an image I can’t stop smiling about even weeks later.

It’s a great reminder that everyone judges accomplishment on their own terms.  For this kid, a routine basket in a game where his team was way ahead in the score was a big deal.  Giving him confidence, pride and a memory that he accomplished something outside his normal expectations.

What’s your business or professional “high-fiving the referee” moment?

To do something unexpected, you need to actually do something unanticipated.  I’m not talking about doing something crazy.  It can simply be bidding on a contract or applying for an award that you’re not expected to win.  If you don’t get it, no one will hold it against you, but if you do get it, it’s a big deal.

Here’s an idea. How about in addition to pitching media outlets that you expect will cover a story, that you also pitch your idea to the biggest, most important media outlet you can think of — even though you know it’s unlikely to get covered.

It’s that unexpected action that can result in your biggest point of personal pride or success.  It’s the unexpected that creates a lasting memory and thus a great story worthy of sharing and repeating.

By Josh Weiss, President of 10 to 1 Public Relations